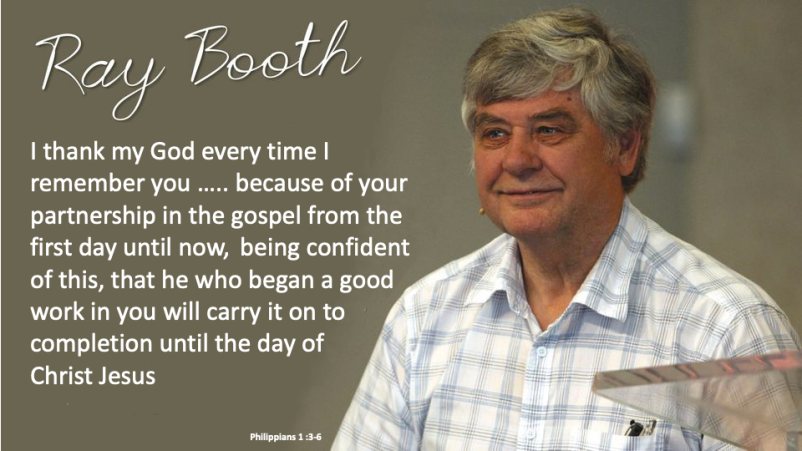 On Monday, it was Dr Martin Luther King day – for my American friends it was a time to reflect on the legacy of a great man. It was also the day, here in Sheffield we said goodbye to our good friend Ray Booth who recently passed – also a great man.
I listened to the service broadcast from the local church where Ray and I were both members together for many years. (I was not able to attend due to lockdown) and I listened to his wife, Jean, his family, his children and grandchildren all talk and give thanks about a man that I also knew but nothing like as well as they did.

What struck me was how often the word ‘ an encourager’ was used.
I remember this myself, many years ago when I felt completely useless for anything. I was just recovering from a minor breakdown, at the end of a tough time in the junior leadership of the church we were in. In reality,  I should not have been left in that tough position for so long, but at the end of that I was exhausted and I had lost hope.
In the middle of that, Ray asked me to travel with him on a trip to Denmark. I’ll leave the full details out for today – but the trip, Ray’s encouragement of me as a person, and the circumstances of that trip moved me from feeling useless to useful, and opened up a door to some major parts of what I now do in the church.
In that trip, he introduced me to Frank and Elisabeth, and soon after Kim and Sus. – great friends and a great church. It’s true to stay that Livets Kilde was pivotal and primary in Merle and I understanding our ministry and purpose. Frank and the team there encouraged me in hearing God and seeing that as something I was called to, gave me space, encouraged me to start writing books, did my first ever translation of a book into another language… I could go on.
  
One of Ray’s daughters – I think – in the service quoted Maya Angelou :

Ray made me feel useful again. He gave me hope in that trip that all was not lost for me.

A Voice of Wisdom for 25 years

I realised as I listened – that whilst I didn’t spend a lot of time with Ray, compared to others – there were several critical moments where Ray’s advice changed my life. In Proverbs 12:15, it says “a wise man listens to advice”, and I always sought Ray’s advice when having to plot some of myself and Merle’s ‘big moves’ in life, such as :
For all of these major events – and others – I consulted and listened to Ray for over 25 years. Let me just briefly mention one.
Once, I was struggling on a leadership team and wondering what to do with my life and my ministry. I wanted to serve but didn’t fit in. I’ve learnt now to see that fitting in is just a way of being driven by man’s praise – God has made me unique for a reason- but then I didn’t understand that. I felt pulled in so many directions.
At that time Ray gave me the best piece of advice I think I have ever received, which I have used myself as advice many many times – even this week 20 years later on a coaching call with an executive at BP I used the story below and I was thanked for the ‘wonderful story and advice’ – Ray’s ‘wonderful story and advice’….

Where are the solid floorboards?

He talked about the time he would renovate a house, the first thing he would do when he looked around at the mess and see all the things that were wrong, was to look for the solid floorboards you could stand on. From there you could build more floorboards and then get to most of the places in the house.
“Ian”, he said, “in your current situation what are the rock-solid floorboards that you have that you can stand on?”
I knew the answer to this question – it was the house of the Lord had just allowed Merle and me to buy. As I thought about this ‘solid floorboard’, I found it easy to make the decision to move churches and start a long association with Meadowhead Christian Fellowship and Jonathan Dunning the leader there. We stayed at MCF for 13 years and our children grew up in that lovely church.  

I am incredibly thankful for the open door Ray, along with Jean gave us, and the encouragement of Merle and myself, when others didn’t. With so little of his time, he made such a big impact in my life and wonder how many others can say the same – probably thousands?
It is no hyperbole to say that like Dr King, Ray leaves behind a huge legacy for us all to be thankful for.
We pray for Jean and the family.

The home for all Game Runner Support and Info

Rise up and Stand Out

Learning to use agile and lean hacks for work and life